Have you ever recorded a video or audio recording of yourself, watched or listened back to it, and thought “That’s not what my voice sounds like! Right?” Well, you wouldn’t be alone. After launching a Twitter poll, we learned other people have similar opinions on the sound of their voice, too.

Turns out, it’s pretty common to feel uncomfortable hearing our own disembodied voices. But why? As it happens, there are a few very real reasons for these feelings and we can categorize them into two main boxes: physiology and psychology.

In this quick article, we’ll explain the physiological and psychological reasons why you might hate the sound of your voice (or at least think it sounds different), and what you can do to try changing your perception of it.

Why does my voice sound different on recordings?

So we’re going to get a little scientific in this section, but don’t worry, dictionaries and high school textbooks aren’t required. We’ll start with the physical stuff—how your body interprets sounds.

No two people are the same or experience things the same way—literally. Research shows that people don’t see colors in the same way even if they’re looking at the same thing. Similarly, we don’t hear alike either, and that’s thanks to both our anatomy and physics.

What’s interesting is that the same physiological stuff that happens in your body when you hear other people, happens when hearing the sound of your voice in recordings, too. So what is that process?

The big physiological differences you experience mostly come from the way sound travels through air, versus how it travels through solids. As you hear external sounds around you, the frequencies reach your ears through the air—and this is where your ears do some cool stuff.

The sound waves enter from the outer part of the ear into the ear canal and hit the eardrum. From there the eardrum vibrates and sends signals to the tiniest bones in your body: the malleus, stapes, and incus. After that, according to the NIDCD, a few more steps happen very quickly:

That’s all well and good for external auditory signals, but how about your own voice?

It turns out the way your voice sounds to you is also affected by how your vocal cords vibrate through your whole skull. According to audiology research, through internal bone conduction (also called otoacoustic), those vibrations reach your cochlea and add another layer of “sound” to interpret.

Because lower frequency sounds travel through dense material better than higher frequencies, your brain interprets the sound quality or internal conduction of your voice as bass-ier than you would otherwise think without the extra vibrations.

According to psychological research, when we decide whether we like or dislike something, our experience of said thing matters in our decision. As such, there are two main ways our past experience affects such decisions—novelty versus familiarity preference.

There are a bunch of factors that come into play as to which ends of the scale people tend to sit. But those who don’t like the sound of their voice on recordings, are experiencing negative novelty preference and a bias toward familiarity preference.Basically, one of the main psychological reasons that those of us who don’t like our recorded voice is because we’re not familiar with it, and we prefer familiar things

A few other factors are at play, including how our voice plays a part in our social identity. When we hear recordings back the voice confrontation might not meet expectations of how we identify. When speaking to The Guardian, a McGill University neuroscientist, Marc Pell, said:

“When we hear our isolated voice which is disembodied from the rest of our behavior, we may go through the automatic process of evaluating our own voice in the way we routinely do with other people’s voices … I think we then compare our own impressions of the voice to how other people must evaluate us socially, leading many people to be upset or dissatisfied with the way they sound because the impressions formed do not fit with social traits they wish to project.”

This level of self-evaluation of our voice creates an expectation of what we think our voices sound like, compared to what we actually sound like. This psychological comparison is also another reason why you think your voice sounds different from what you expect.

How to stop hating the sound of your voice on video

While there’s not much we can do about the physiological process of hearing, we can think about how to combat the psychological issues of hearing our own voice. To help figure this out, we spoke to Michael Keenan, co-founder of Peak Freelance, a membership community featuring expert interviews and a podcast about freelance life (aka lot’s of video and audio recordings of his voice). He is also in the familiarity preference camp:

“I don’t like the sound of my own voice. To me, I sound really whiny and I talk too fast. I get embarrassed when I listen to my own voice recorded. But, if you want to start a podcast or create videos online, you need to get over it.”

The idea of “getting over it” is simple in theory, but what about in practice?

“After repeated exposure to my voice, I came to terms with the above fact. I wasn’t ever going to like my voice but that’s just too bad for me. It gets easier to hear your voice over time.”

Let’s look a little closer at that term “repeated exposure.”

The idea of repeated exposure Michael mentioned is another way of describing the “Mere Exposure Effect” or, as we highlighted earlier, “familiarity preference.”

The process that Michael described is about taking what was novel and unfamiliar and making it more familiar. When the sound of your voice becomes more familiar to you, you get used to it. As a result, it gets easier watching and/or editing videos of yourself.

But what if repeated exposure over time still doesn’t help? Michael has some further advice:

“Listen to your recorded voice as an observer. Pretend it’s not you. You want to really nail down why you don’t like your voice. Then look for ways to improve on it.”

When we’re stuck in the thought pattern of “my voice sounds weird” instead of actively identifying what about it makes us uncomfortable, it’s harder to resolve the problem. Michael suggests using this active approach to figure out what parts of your voice you don’t like and working on them:

“Maybe you need to speak slower, or a bit more clear. Maybe you decide to create an audio persona, so it feels less like “you” and more like an actor of sorts. At the end of the day, the big blocker is you.

There is no magic trick. Accepting and embracing your natural voice is the first step, then looking for ways to become a better speaker will make you more confident in your own voice.”

That last bit is a nice segue into our last bit of advice for changing the perception of your voice: acceptance.

Short of going to voice therapy or taking a public speaking class, the next step of being more comfortable with your voice is accepting it as it is.

The only person who thinks your voice is “weird” on recordings is you. To everyone else, you sound exactly as you normally do because they don’t get to “hear” the bone conduction that gives your voice that extra subwoofer layer.

People are also more likely to listen to the content of your words rather than the sound quality of your voice (unless there’s a microphone or audio quality issue, but then they’ll blame the tech). So don’t worry much about other people’s opinions. Just create great content.

Get your video groove on with record

One of the easiest and most effective methods for improving how you feel about your voice on video is to just practice and get more familiar with the sound. That’s where Vimeo Record comes in.

Vimeo Record makes it easier than ever to create high-quality videos for your needs. Whether you’re a communication professional, CEO or marketing executive, or a social media influencer, you can record videos easily in minutes.

Get use to your voice with Vimeo Record 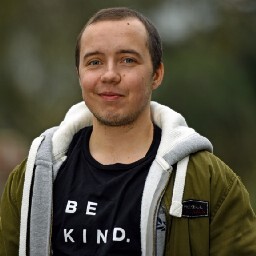 Alex is a freelance writer specializing in B2B SaaS and eCommerce marketing, as well as a business Ph.D. candidate. When he's not typing away, he's (slowly) learning Japanese and having a blast playing for the local baseball team.

Up next in Video for Business

How to optimize videos for SEO

Struggling to write a webinar invitation? Learn tricks of the trade with the best invite examples to help you reach your registration goal.

Town hall meetings are a place to share business updates, align on goals, and keep employees engaged. Learn how to launch a town hall meeting at your organization.